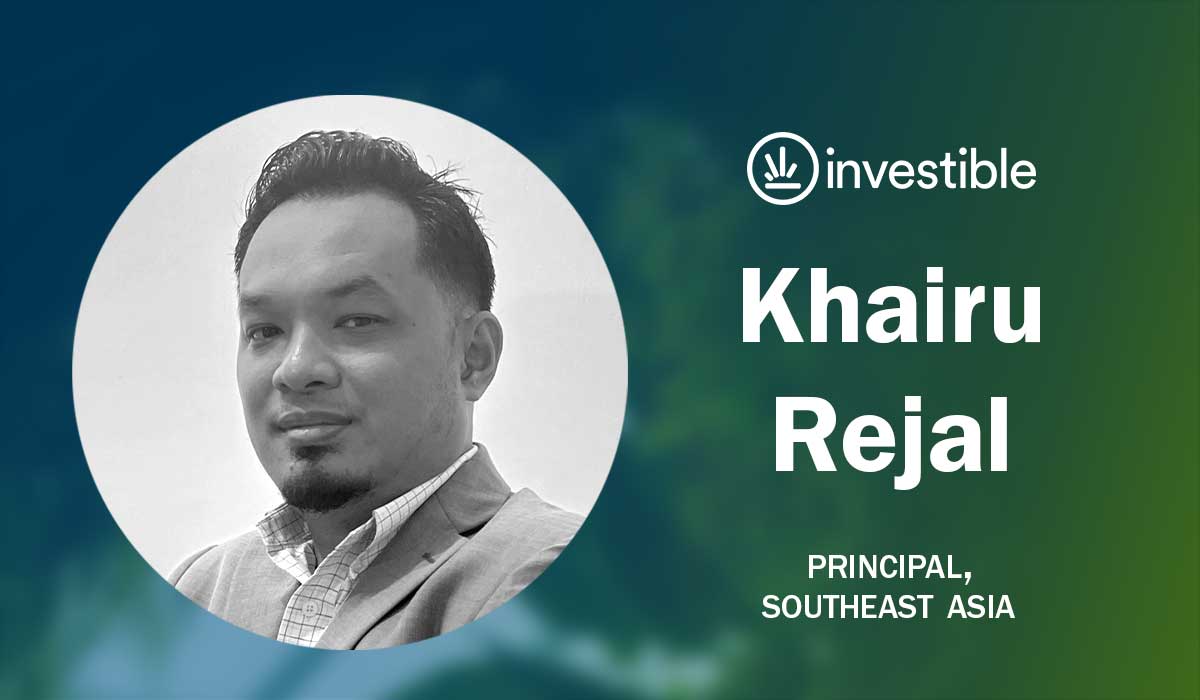 As an experienced VC based out of Singapore, Khairu Rejal has huge ambitions for the tech ecosystem all across Southeast Asia.

Over the past few years, Investible has accelerated activity in Southeast Asia with investments in numerous countries, with more on the horizon. Core to our ambitions in the region are our people, and we are excited to have the experience and passion of Khairu Rejal within our growing team.

As Principal for the Southeast Asian region, Khairu leads investment activity from founder-identification, diligence and our full support of the people and companies we back. His years of experience within VC and the startup ecosystem, positive attitude and aspiration to leave an impact make Khairu a key member of the Investible crew.

Firstly, tell us about your journey to date

I started working at Nanyang Technological University and launched what was Singapore's first accelerator program - Ideasinc - in 2008. We borrowed the concept from MIT100k and Ideaslab in the US and adapted it for Singapore. As the first capital provider, Ideasinc offers mentorship, coaching, training, and access to other venture capital firms.

Next, I joined Majuven - an early and growth stage venture capital firm, in 2013. I supported the GPs and was involved in fund structuring, fund raising, auditing, deal execution, dealflow origination, and portfolio management. Additionally, I manage and conduct deals in the US, China, India, Thailand and Indonesia.

With other like-minded angel investors, I founded Rekanext in 2017 in order to capitalize on the exponentially growing startup and venture capital ecosystem in Southeast Asia. The majority of my time until 2021 would be spent in Jakarta. Within four years of investing, Rekanext invested in Indonesia, Singapore, Vietnam, and Malaysia yielding a 2.7x TVPI.

What excited you about joining the Investible team?

I learned about Investible the first time I met Creel and Trevor c.2016, in Singapore. Creel and Trevor's entrepreneur-friendly approach impressed me immediately. Fast forward to last year, I was surprised to learn of Investible's growth with its second Early-Stage Fund and newly-announced Climate Tech Fund!

The organization's vision is continuously evolving, which motivates me to join its growth. Furthermore, its interest in playing a more active role in Southeast Asia is very strategic to the skills and expertise that I bring. In my role as Principal (SE-Asia), I get to do what I enjoy most - identifying great founders and ideas to fill gaps in the market and creating value through those opportunities - thus in the larger scheme of things play a part in creating a positive dent in humanity.

What do you love most about the startup ecosystem?

I believe in the mantra "create value, create revenue" which should be the raison d'être of every company founder. Startups that disrupt the world address inefficiencies, gaps, and challenges from the ground up. By providing such products and services, stakeholders are most likely to benefit from the availability of those. Thus, creating value. Taking the value to scale, revenue becomes a byproduct. Thus, startup ecosystems generate impact, and my mission is to contribute to creating those impacts.

Making a dent in humanity.

I know it's cliche, but I'm driven by purpose more than anything else. Without this, I would be dragging my feet to work, and I strongly believe that life is too short to waste on anything else.

I was listening to a keynote speech recently and was struck when the speaker quoted Alfred Lord Tennyson's Ulysses, which moved me deeply. There are so many points of reflection. Some of my favorite lines:

'Tis not too late to seek a newer world.

Push off, and sitting well in order smite (...)

To strive, to seek, to find, and not to yield.

‍The poem is a portrayal of Ulysses' frustration with his dull and meaningless existence as king of Ithaca. Ulysses still longs for the days when he would conquer the world, as he used to. He found joy, he claims, in every moment he spent traveling, even at the times when he was suffering. He lived for the journey despite—or in spite of—the toil it brought, and is thus restless when sitting on his laurels too long.

Great founders are like this, they enjoy the thrill of the hunt!

I started a non-profit organisation called Majulah in Singapore and before Covid would regularly send teams of passionate young students for reforestation missions in Sumatera, or coral restoration projects in Sulawesi.

‍You can get in touch with Khairu on Linkedin.