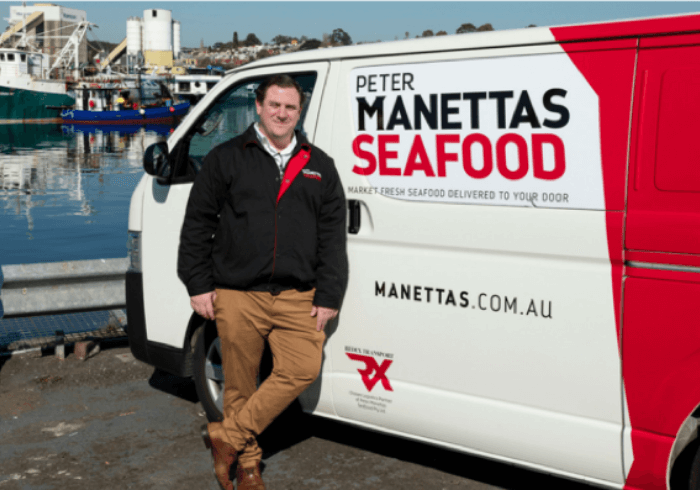 A Sydney-based restaurateur is making waves in the seafood industry, having raised $2 million to launch an online auction platform that aims to remove the need for early-morning fish markets.

A Sydney-based restaurateur is making waves in the seafood industry, having raised $2 million to launch an online auction platform that aims to remove the need for early-morning fish markets.

A common face around Sydney’s Darling Harbour, Peter Manettas has been involved in the food scene for 15 years through his family business, Nick’s Restaurant and Bar Group, which owns six restaurants in Darling Harbour.

But the Manettas family legacy is in the seafood industry and Mr Manettas is looking to launch the country’s first seafood delivery service, called ShoreTrade, which he said gives all consumers the chance to buy the best fresh catches directly.

He told The Australian Financial Review he wanted to stop the “antiquated process of the old pen and paper”.

He said fish were auctioned each morning to a crowd of about 100 people before passing through various hands and arriving in a home kitchen about a week later.

“What we’ve built on a logistics scale is completely new and custom built. It allows the fisherman, a cooperative or a processor to list their catch, then that catch will open to buyers all over Australia and internationally, if they’re approved,” Mr Manettas said.

“It will then let them purchase the fish and track its delivery because it’s integrated with logistics companies including airlines all around the country.”

The company has raised $2 million from Investible’s first venture capital fund, as well as from its club of angel investors.

ShoreTrade will compete with China’s Gfresh marketplace, and is in testing ahead of an official launch early next year.

“Peter Manettas is exactly the type of driven founder with proven industry experience we are looking for,” Investible founder Creel Price said.

“His relationships within the industry are unparalleled and his vision for the digitisation of the industry is unique. ShoreTrade has the potential to be a global disrupter because it benefits both fisherman/co-operatives and purchasers.”

Though not yet officially launched, the platform has already signed up 4000 users and attracted interest from the US, Samoa, Tonga, Fiji and India.

While it’s been well received by the industry, established markets like the Sydney Fish Market have not been as welcoming.

“The Sydney Fish Market will be threatened to an extent. There is still a market for that, but as a clearance house not a trading platform,” Mr Manettas said.

ShoreTrade has estimated that fishermen will bank 7-10 per cent more from each sale by bypassing the traditional fish markets.

A month after ShoreTrade is launched Mr Manettas intends to implement a blockchain feature to provide traceability of the fish through the supply chain.

He said every part of ShoreTrade had been designed in consultation with the industry.

“We’ve even developed the app in the dark to ensure fishermen are able to easily and intuitively use this when out in the dark on their boats.”